Goddess Ice Era came home and found that her slave had not prepared the food she had told him to. She was hungry and wanted to eat but he had not prepared anything. She punished him by tying him up and using her high heels to trample him and crush him. She even kicked him hard in the balls and crushed his face leaving him in a lot of pain.

This hot mistress knows how to have fun. She likes using her hot body and naughty behaviors to have fun at the expense of the person she intends to humiliate. Today it was this guy who thought he would be able to fuck her. But she had other ideas and she facesat on him and made him lick and smell her ass. When she was done with him, she sent him away. 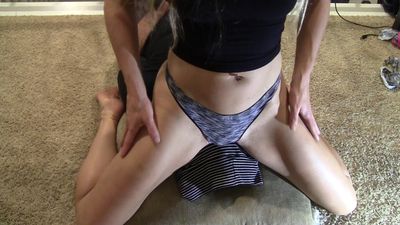 Mistress humiliates slave for telling neighbors about her

This mistress discovered her slave was telling her neighbors about her and she was angry. She is a private person and does not like her life being shared with others. She had to teach her slave a lesson and she did it humiliatingly. She made him kneel before her and open his mouth. She spat into his mouth and forced him to swallow it. She promised to punish him worse than that if he did it again.

Mistresses punish girl for trying to wreck their marriages

This girl was after mistress Gaia and her friend's husbands. This girl knew they were married but did not mind going after them. These mistresses could not sit back and watch their marriages being wrecked. They sought the girl and taught him a lesson. They tied him down and slapped him hard. They also kicked him and pinched and squeezed his nipples as hard as they could before they let her go with a warning.

Mistress Erika needed her project finished quickly but her contractor did not do things as fast as she wanted them done. She was getting worked up about it and had to do something about it. When she had had enough, she called him to where she was lying on the sofa and she ordered him to lick the soles of her shoes. She forced him to lick them clean and told him that if he did not work faster, that would be what he would do at the top of every hour.

Mistress Gaia loves had not punished her slave in a long time and he assumed she was done punishing him. So he took advantage of it and even ignored the instructions she gave because he got away with it. But today she was determined to right some wrongs so she crushed his face with her ass. She made him smell and lick her sweaty ass before giving him a last warning.

Princess Betty and her friend Bertie caught this guy assaulting his wife. They had to do something about it so they just entered his house and dragged him to the bedroom without caring what his wife would say. They trampled him and humiliated him. They spat on him to show how disgusted they were with him. They told him to apologize to his wife and make amends or else they would go back and punish him in a worse manner.

Mistress Celine is a popular girl in school and many girls want to be friends with her. Many of them want to be in her circle and she only allows very few to be. This girl looked promising so she decided to test her further. She called her to where she was studying and made her lick the soles of her shoes and to her surprise, she did it without asking questions. She took her in.

This mistress caught her boyfriend checking out other girl and she was pissed. She got jealous and decided to punish him. She humiliated him and made him lick her spit. She forced him to lick the spit on her shoes as well as lick the one that was on his face. She told him if she ever found him checking out girls again, he would only have himself to blame for what would happen.

Miss Asera discovered that her slave had gotten used to her punishment and she wanted to give her another one. She did not want him to ignore what she told him just because he did not fear her punishment. So she decided to try something she had never tried before. She used her boots to crush his balls and his cock. She also rushed his head and his stomach as well.