All articles tagged with "Slave"

Officer Mandy is a sexy brunette officer wearing a sexy uniform with black pantyhose as she confronts a loser salesman about a thousand dollars worth of unpaid parking tickets. He laughs at her and says no and does not take her seriously at all so she has to show her how serious she is. She takes him and brutally slaps him over and over again with her strong hands until he pays his fines.

Domina Victoria is a sexy brunette mistress wearing a sexy black dress that decides to have some fun with their loser slave. She has him wearing a mask over his eyes and she is wearing a black collar with a leash as she orders him over to her like the loser dog that he is. She then sits on a table and spreads his legs apart and pisses into his mouth and makes him drink her fresh hot golden nectar.

What makes Mistress Kitty happy is making her slaves groan. She takes her favorite slave out for a walk and lays him down on a trail. She spits in his face and begins to walk all over him. She digs her heels into his face, steps on his balls and walks with her full weight up and down his body. She loves the way it feels to make him squirm.

After a long day out, Hailey comes home and doesn't want to walk on her nice hardwood floors. She has been walking in snow and ice and doesn't want to clean the mess. She calls her slave into the room and she walks on him. She puts her salty, icy boot in his face and makes him lick the mess off her boots. When she's done, he can smell her socks and help her warm them up. 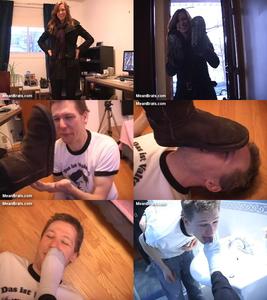 Girl Saskia Gets Lots of Practice

Girl Saskia knows what she wants and she needs practice to be the best. She gets her slave and ties him up. She strips down to her panties and begins to sit on him. As she gets better, she strips completely naked and puts her bare feet in his face. She steps on him and she sits on him, cutting his breath off. She loves being in control and getting her practice in.

The Punishment is Extreme and Necessary

There is nothing that he can say to stop his punishment. When he displeases his two mistresses, he has to be punished. They stripped from the waist down. They made sure that he feels his punishment. The put on their boots and start to kick him in his dick. They aim for his balls and makes sure he feels the pain. He goes to his knees but that doesn't stop them, they make sure he gets all his just deserts.

Mistress Anna is a newbie

Mistress Anna may be new, but don't let that ever fool anyone. She is just as brutal as the rest of the mistresses that love to smother and walk all over a slave. She is going to take her new wedge heels and show a slave he is nothing, but walking all over his body and sticking her wedge into his face and mouth. She is a true natural.

Alex and Olive are a team

Alex and Olive are two extremely hot and sexy babes. Their slave is a total loser and they always make fun of him being fat. He is going to find out what it is like to have the ass's of two hot girls on his face. The ladies will take turns riding his pathetic face and giving him a good dose of their lady scent all over him.

Miss Chloee and her brown boots

Miss Chloee is very daring, but also a fun time if a foot or boot fetish is in order. This pretty lady is going to be walking outside to meet her slave that must not only give her money, but the slave is going to lay on the ground so that she can walk all over his body and even get her boots cleaned by the slave's mouth.

Miss Atrax and her whips

Miss Atrax loves to get brutal with her whips. She has her friend Lady Chantal come over and they proceed to whip a slave super hard. The slave gets whipped so hard, they are leaving marks on his body, but that doesn't matter to the lovely ladies. They are enjoying all of the torture they are inflicting to the slave and his naked body tied up.