All articles tagged with "Feet"

Maddy, Meg and Britney smother together

Maddy, Meg and Britney are three gorgeous, blonde femdoms who have their slave on his back and they are going to enjoy every second of their time together. They take turns using his face as a seat, making sure that she can't breathe in anything but the aromas from their unwashed little assholes and tight little pussies. Every girl has her own smell and he learns whose ass smells the best.

My hiking boots are totally muddy after a nice long walk in the woods and I haven't cleaned them yet. I walk up to my slave while holding the boots in my hands and I put the first one on. I put my foot on his face while I tie the shoe and after putting on the second shoe as well, I get on his naked chest and clean my boots on his skin. I also step on his head and use his face as a doormat for my muddy boots. In the end, his chest and face are completely covered in mud and my boots are more or less clean.

Felicita shows you where to kiss

Mistress Letizia likes to use as much cruelty as she can in her slave domination, but today she gets downright dangerous. She puts her slave in a straight jacket and makes him lie down in a bathtub full of water while she tramples him. She stands on top of him with her full weight holding him underwater. She sits down on top of him while his head is completely submerged.

Mistress Felicia decides to unwind after a hard day at work by sitting on the couch and being worshiped by her foot slave. She commands the submissive male to take off her flat shoes with his teeth. The long-legged Mistress then smothers his face with her nylon stocking-covered feet. He gets a good whiff of her sweaty feet. She even makes him suck her toes before he licks the soles of her tired feet.

Madame Marissa wants to have some fun and break in her new slave. She just got some cake from her favorite bakery but she's not hungry. She spits on it and throws it on the ground and steps all over it. Smooshing it under her boots. Then she makes her loser slave lick it all up. She makes sure it's all gone. Then she makes him lick her boots clean.

Lady Spooky wants to make sure her slave loves her feet. They're her favorite method of torture. She puts her pathetic slave under her bed so he can't move. Then she rubs her dirty sweaty feet all over his face. He can squirm all he wants but that won't stop her from forcing him to love her feet. The fun won't stop until after he's sucked all of her feet clean.

Ariana and Aurora wanted to see the stuff this guy was made of. They had always thought he was a sissy even though he bragged of having balls of steel. They called him to their house and when he came, the script did not go as he planned. They trampled him, almost choked him, tortured, abused and humiliated him. When they were done, they had confirmed he was a sissy.

Liz was having a wrestling contest with this guy. He looked down upon her and thought it would be a walk in the park. The mistress surprised him and she threw him down and choked him. She inserted her toes in his mouth and almost tore his mouth. She also stepped on his neck and almost choked him completely. When she was done with him, he could not even look her in the eye. 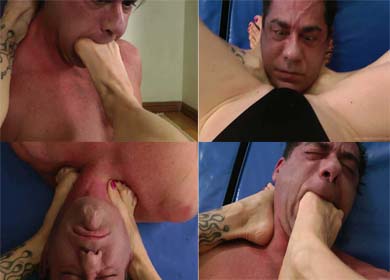 Cassandra doesn't mind when she gets her feet sweaty because she knows that she has a foot fetish slave that will gladly lick all the sweat off for her. She had her boots on all day today so her feet are especially sweaty. Her slave lies in the floor ready to receive her sweaty feet. She puts her cute nylon socks in his face then takes them off to lick her bare feet.